Over the past few weeks, quite a few people connected to city politics have told me that they don’t think the urban rail proposal will pass in November. With the current property tax unrest and questionable merits of this operationally risky, $1.4 billion urban rail project, I believe it would be careless for Mayor Leffingwell to continue pushing for this project to be on the November 2014 ballot.

During Mayor Leffingwell’s State of the City Address earlier this year, he went so far as to threaten that if Austin did not pass a rail bond this year, we would fail as a city. This level of simplistic thinking and fear mongering on a complex city issue like public transit is not only wrong, it is extremely unproductive to transit politics. We deserve more from our elected officials.

How We Got Here

Mayor Leffingwell obviously did not come up with the “Rail or Fail” soundbite by himself. It came from a group of people within the establishment who think that any rail project is better than no rail project at all. This group’s perspective is largely framed by the failed 2000 light rail election, which lost by only a very small margin. 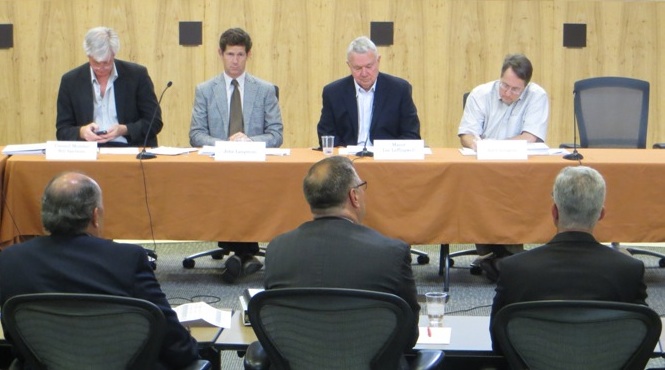 Since then, this small group of well-intentioned-but-misinformed urbanists have slowly and half-heartedly pushed for a rail investment that follows a path of least resistance. Their rationale for not pushing for another proposal on the most favored, heavily traveled, and comparatively more dense Guadalupe/Lamar corridor is based on the fear that it is politically unfeasible to take a lane away from automobile traffic. They have instead favored a proposal on San Jacinto that would seek to use transit primarily to encourage urban development at Mueller (and most recently at Highland Mall) where it currently does not exist.

I am sympathetic to those that are frustrated with the merits of this specific urban rail proposal, yet are worried that we may never get another opportunity to put rail on the ballot. After all, I used to be one of them! Their position is summed up here by fellow Urban Transportation Commissioner Rich MacKinnon and rebutted here by ex-AURA Executive Committee Member Julio Gonzalez Altamirano. (I really encourage everyone to read those two posts. It is a good example of the current state of affairs among Austin’s transit community. For brevity’s sake, I chose to skip a more in depth explanation.)

I ultimately changed my mind about this proposal a few years ago when I realized how operationally inefficient and risky this project was actually going to be. Contrary to what the public is being told by Project Connect, there are actually very few corridors in Austin with the land use and density needed for rail to make financial sense; that is, where it is actually more cost-effective to run rail than buses. The arbitrary Highland Sub-Corridor outlined by Project Connect simply does not have sufficient densities to support rail at this time.

A lot of people are wondering what will happen if rail ends up failing. Obviously Leffingwell’s “Rail or Fail” saying isn’t true. If the proposal ends up failing in the November election, life–and Austin’s transit system–will simply go on. A much more desirable outcome from an advocacy standpoint, however, would be for Mayor Leffingwell to give up on this project altogether. No matter what happens with urban rail this year, the majority of Austinites utilizing public transit will continue doing so on a bus for the foreseeable future. And I will see them there.

So, with more than five years of going back and forth over the many iterations of this fundamentally flawed urban rail proposal, what lessons have we learned?

For almost a decade, the obsession with urban rail as a symbol of a “world class city” has stood as an impediment to addressing the real problems with Austin’s transit system. I believe that one of the biggest lessons throughout all of this is that we need to stop talking about transit in only “rail vs bus” terms. Outside of CapMetro and City Hall circles, very few people care whether they’re on a bus or a train. What they do care about, however, is how good their transit system is at providing freedom of movement throughout our city. In many cases, the vehicle type matters very little when it comes to providing that freedom. For example, put a rail vehicle in the same environment as a “slow” bus & you’ll see how absurd technology discussions really are. What matters most to improving service in Austin is infrastructure.

In 2012, I wrote the following in an email to the Alliance for Public Transportation leadership after Mayor Leffingwell decided to postpone putting the urban rail bond on the ballot:

“Going forward, I would encourage us to focus less on transit technology (rail or bus) and more on level of transit service (frequency, speed, span, etc). Jarrett Walker, a public transit consultant and author of Human Transit, believes regions should focus “on mobility outcomes, and use whatever technology best delivers those outcomes in each corridor.”

This particular lesson cannot be overstated. We have to understand that what is important to attracting global talent in the 21st Century isn’t shiny rail vehicles, but the actual freedom that transit service gives to those wanting to live a carfree lifestyle. In the future, let’s focus less on the wrapper and more on the substance of transit service.

Where We Are Going

It is time to start building a new narrative about transit that brings Austin’s transit community together. Below is a list of things that I will be focusing on over the next two years:

Over the next few weeks, I will be writing a blog post dedicated specifically to each of the ideas outlined above.

If there is one thing I have learned over the past year, it is that I cannot do any of this by myself. Do you have other ideas on how to make Austin’s transit system better? Please share them with me on Twitter and Facebook! I will be compiling our ideas and will eventually host a public workshop to develop more concrete ideas on how to go about achieving each goal.

What do you want to say? Cancel reply